As soon as Clementine DeMauro discovered the Barnegat Light Ocean Mile Swim, she was hooked.

“My family and I were at a restaurant, and my dad saw the article about it in The SandPaper and I said right away that I wanted to do it,” said the 10-year-old boy from Wallingford, in Pennsylvania. “It was in June and I’ve been training a lot since then. I love swimming so I just wanted to have fun with it.

For her first time swimming a mile in the open waters of the Atlantic, Clementine not only managed to be the youngest competitor on July 31, but she did pretty well, finishing in 46 minutes and 6.39 seconds – stepping across the line past her aunt, Eissa Bonamo of Beach Haven, in 277th place.

“We kind of had a plan,” the youngster said. “I swim a lot in butterfly, but today I mainly did freestyle. When I was a little tired I switched to breaststroke. The goal was for us to finish together.

Also for her first time in the race, Maddie Cooke also had a plan. The Penn State sprinter, from Phoenixville, Pa., Has competed in several lifeguard tournaments as part of the Barnegat Light Beach Patrol – the recipient and host of the 12th annual race, which begins at 30th Street and ends at 16th Street – just wanted to get past as many corps as possible and get closer to the front of the pack.

“I just wanted to have fun and do my best for Barnegat Light,” said Cooke, who clocked 21: 32.34 to win the women’s division and finish 13th overall, crossing the line seconds behind Zak Westerberg. by BLBP. “It wasn’t too bad there. I had enough space to get past people. 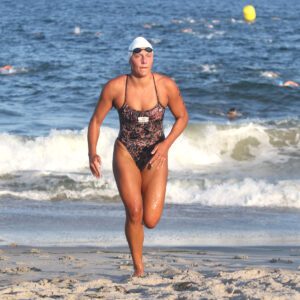 BEFORE THE PACKAGE: Maddie Cooke of Barnegat Light Beach Patrol runs to the finish line after emerging from the Atlantic as the first female in the annual Barnegat Light Ocean Mile Swim on July 31.

Keep in mind that in the women’s field, Cooke started three minutes behind the men so she managed to pass a lot of guys on her way to the top step of the podium. And with Maggie Shaw – the Harvey Cedars Beach Patrol powerhouse who had won the women’s division the last three times – not in the race this year, that left the door open for freshman guard.

“I haven’t competed in the ocean until this summer,” said Cooke, who recently graduated in business innovation and entrepreneurship and plans to return for graduate school. “I had heard some of the names of other women who generally do well here, but I’m not focusing on all of that. I just do my run and I don’t worry about other people. I just wanted to get as close to the top as possible and get those points for BL.

Meanwhile, the men’s division hasn’t been as fast as it had been in recent years, but 15-year-old Brendan Morgan rose through the ranks this time around, completing the mile in 19: 56.80 to take first place in the general classification. Two years ago, barely a teenager, Morgan finished 43rd overall with a time of 20: 29.68.

“Obviously I’ve grown a bit in the last few years so I was stronger today,” said Morgan, who swims for a club team near his hometown of Mount Kisco, NY. not had a good start, but once I got out of the first buoy I had my shot pretty solid and then just kept a good pace from there. 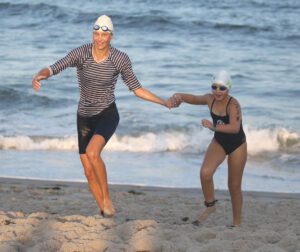 THIS IS THE WAY: Clementine DeMauro, 10 (right), grabs the hand of her aunt, Eissa Bonamo as they make their way to the finish line during the Barnegat Light Ocean Mile Swim on July 31.

By the time the leading peloton had reached three quarters of the race, Morgan was very close to the front. He made his way to the lead about 100 yards before the final scorer, then easily made his way to the beach as three swimmers battled for second place behind him.

“I haven’t looked around at all,” he said. “I knew I had passed those few guys later in the race at some point, but I didn’t look back to see where they were after that. I just kept my pace and stayed focused on the arch at the finish line. I wasn’t even sure I was in front until I got to the beach. It was fun. Now I’m going to have to come back and defend the title.

“It was great to find this race again,” said BLBP director and chief John Schulze. “A lot of people had asked me over the past six months if we were going to participate in this race. We had to make a decision right after the holidays as to whether we were going to try to make it happen, not knowing what that would happen after the winter with the pandemic, and the municipal officials gave us the green light, so here we are. We could not have dreamed of better conditions, with a water temperature of around 70 and no rough water, and seeing the love between everyone here was awesome.